As I noted in the Introduction to the Elixir Ensemble, the inception of the group arose from the 2014 Elixir Festival, an initiative celebrating life-long creativity conceived and presented by Sadler’s Wells, featuring works presented in both the main house and in the Lilian Baylis Studio. The main house presentations were part of an evening called Knowbody which is where the debut of the Elixir Ensemble took place with the premiere of The Elders Project (2014 Burrows and Fargion). This website contains some information about the wider festival, including extracts from the Sadler’s Wells website, although the 2021 demise of web software such as Adobe Flash sadly renders some video links inoperable. This is a challenge to all those with an interest in the archiving of performance processes and outcomes and we are actively looking for a sustainable solution.

On a personal level, the Elixir project began with a cryptic email in November 2013 from Jane Hackett, whom I had known for some years, and who at the time was the Sadler’s Wells Director of Creative Learning. The email simply said that she wished to discuss an idea with me and could we meet. So on 14th November I arrived at the Sadler’s Wells backstage café and somehow, by the time I departed, my involvement was agreed. I went home wondering why I had accepted the invitation as I had not performed on stage, or done, or taught dance classes for many years – my dancing life was located entirely in a past life, locked away and seldom in my thoughts. There was time to digest the implications of the return to dance as it remained an abstract future commitment until June 2014 when we all finally met in the studio to begin work. 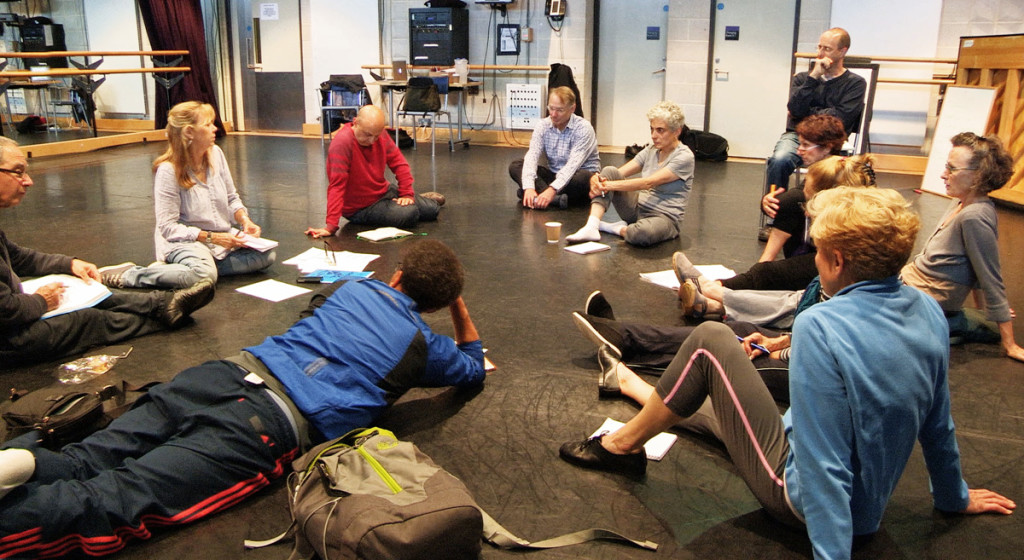 The beginning was initially disorienting. Even to return to a studio in dancing clothes was disorienting and this sense was exacerbated by my intermittent presence due to commitments in China and the UK. The studio was a place both familiar and strange, which sparked a discernibly changed psycho-physical state. Familiar because of my dancing past and my present work observing choreographic processes; and strange in the novelty of being in a studio as a dancer again, and in the familiarity of the dancer persona despite the decades that had passed. But the practice that was both the ‘refuge’ of the dance student and then my ‘home’ for an additional twenty years is deeply embedded in memory, embodied viscerally and neurally as a way of being – and so almost instinctively I began a process of internal negotiation of neurological impulses and proprioception, its links to the outer materiality of the body, and I began reconstruction of the dancer persona.

I was also in good company with my dancing colleagues and reassured by the selection of creators Jonathan Burrows and Matteo Fargion. I have an almost visceral fear of nostalgia and these artists’ critical rigour is the antithesis of nostalgia’s numbing blanket. However, when we began with an investigation and sharing of memories of our dancing lives I began to feel a bit uneasy. But somehow the atmosphere Burrows and Fargion created in the studio enabled relaxed reminisces and laughter which was enhanced by the sense of joyful absurdity that the creative duo instilled. And although the work emphasised the passage of time, we were somehow saying something significant in the present about the past – it was about the past and about nostalgia, rather than indulging in nostalgia.

The process drew not only on our personal backgrounds in dance, it explicitly referenced London Contemporary Dance Theatre (LCDT), the company where I danced and choreographed from 1974 to 1989, a background shared with many of my Elixir colleagues who were also LCDT members. In the videos of these rehearsals LCDT’s founding artistic director Robert Cohan can be seen and Jonathan Burrows is clearly enjoying his presence – an enjoyment now made more poignant as Robert Cohan passed away on 13 January 2021. Also present on the website is my colleague Martin Welton from Queen Mary University of London. We have worked together since 2011 on the ArtsCross project and here he is acting as an informed observer to the process. In this way we have the voices of those involved as participants as well as an observer-participant whose principal role is to observe, but whose background as a performer familiar with both the work of Burrows and Fargion and studio contexts, means he is engaged as participant even in his silent presence.

I hope that you enjoy following our journey back to the stage.