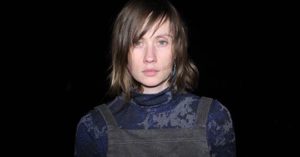 Janine Harrington is a choreographer, performer and writer. Her work to-date has been mainly for non-theatre contexts, foregrounding ideas about relationship, agency, access and attention through live audience interaction and danced games. She is interested in choreography, technology and language at the level of processes and exchanges. This underlines all her work.

In 2011-12 Janine was BBC Performing Arts fund choreography fellow with Independent Dance and she has twice been recipient of the DanceWEB scholarship to attend ImPulsTanz Vienna (2013/16). In 2014 she took part in SDD Artist-Curator mentorship scheme. In 2016 she was artist in residence at Brandwatch for Brighton Digital Festival and at Villa Empain, Brussels, where she developed Satelliser: a dance for the gallery for exhibition Répétition.

Janine organises Unspecified Involvements, a nomadic platform for fragile / partial / experimental practices and works on ENGAGEMENT, an anti-sexism campaign for the performing arts. She also teaches and supports other artists with production activities, rehearsal directing and writing.

As performer Janine worked with Tino Sehgal at Fondation Beyeler, Basel dancing the solo Instead of allowing some thing to rise up to your face dancing bruce and dan and other things (2000).

Re-Search: Screensaver Series is a research and performance project with live dance and sound, experimental video formats and research towards a digital iteration of the work. The dancers work with a complex improvisational score which meets real conditions of floor, sound, audience, seeing/ not- seeing and weight exchange. The score includes a spoken text, physical exploration, sound coding and study of recurring forms in nature. This project phase will prepare the work for the next stage: a prototype download/ application for home computers/ tablet devices.