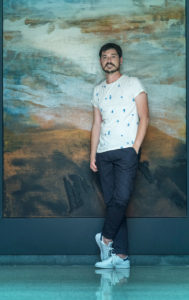 ‘Being selected for the Four by Four project is an honour, for its prestige and for having been chosen by artists that I admire so much. And on the other hand, it is a great opportunity to start a creation that at this moment interests me and I would love to develop. Infinitely grateful and excited!’

Jon Maya Sein began his career at the age of six in the traditional Basque dance group Ereintza Dantza Taldea, in his hometown Errenteria (Basque Country). As a solo dancer, he was Champion of Euskadi de Aurresku (traditional dance of the Basque Country) seven times between 1997 and 2005.

In 2002 Maya Sein created the Kukai Dance Company, with a view to create contemporary shows inspired in traditional Basque dance. Since then he is the company director, and also performer and choreographer of some of the shows. His trademark as an artist is the hybridization between Basque dance and different artistic languages in a contemporary context.

Previous collaborations have included work with theatre director Mireia Gabilondo for Tanttaka Teatroa, and with choreographers such as Marcos Morau, Sharon Fridman, Cesc Gelabert, Israel Galván and Brodas Bros. He also teaches Basque dance at the Errenteria School of Music and Dance.